Posted on September 2, 2019 by Disciple of Christ One comment

“The Lord your God will raise up for you a Prophet like me from your midst, from your brethren. Him you shall hear.” -Deuteronomy 18:15 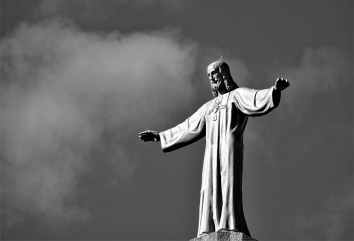 Happy Labor Day! I hope that you get some rest from all your hard labor. Thank-you for reading! I appreciate you!!!

Moses prophesied about Him in his time – that God would raise Him up from among the people (Deut. 18:15). During Jesus’ time on earth, the people regarded Him as a prophet, as well. “So the multitudes said, ‘This is Jesus, the prophet from Nazareth of Galilee'” (Matt. 21:11).  And the chief priests and Pharisees would have arrested Jesus earlier, if they could have, but they feared the crowds since the people regarded Him as a prophet (Matt. 21:46).

Others saw Jesus as a prophet, but He also referred to Himself as a prophet, as well. Notice when He said, “Nevertheless, I must journey today, tomorrow, and the day following; for it cannot be that a prophet should perish outside of Jerusalem” (Lk. 13:33). Jesus knew that He was going to be put to death, and He often made mention of it to His disciples.

Just like prophets of old before Him, Jesus was anointed with the Holy Spirit. Isaiah prophesied that He would be, in Isaiah 42:1 and Isaiah 61:1. Notice Isaiah 61:1: “The Spirit of the Lord God is upon Me, because the Lord has anointed Me to preach good tidings to the poor; He has sent Me to heal the brokenhearted, to proclaim liberty to the captives, and the opening of the prison to those who are bound.” And then there was the drop-the-mic moment when Jesus stood up in the synagogue on the Sabbath and read Isaiah 61:1, handed the book back to the person who gave it to Him, and sat down. No other words were required. Jesus was anointed by God.

In the same manner as other prophets, Jesus revealed God to man. In Matthew 11:27, Jesus said, “All things have been delivered to Me by My Father, and no one knows the Son except the Father. Nor does anyone know the Father except the Son, and the one to who the Son wills to reveal Him.” Jesus made known to us God, the Father.

He also declared His teachings to be God’s, just like other prophets. Jesus said, “For I have not spoken of My own authority; but the Father who sent Me gave me a command, what I should say and what I should speak” (Jn. 12:49).

Similar to the prophets of old, Jesus foretold things to come. In Matthew 24:3-35, He foretold of the destruction of Jerusalem. Notice what more He said in Luke 19: 43-44: “For the days will come upon you when your enemies will build an embankment around you, surround you and close you in on every side, and level you, and your children within you, to the ground; and they will not leave in you one stone upon another, because you did not know the time of your visitation.” Jesus knew what would happen in the future (He still does), and He forewarned His people.

Lastly, like other prophets of old, God commands that we hear His Son Jesus (Acts 3:22). Those who refuse to hear His words and reject His commands will be punished. “And it shall be that every soul who will not hear that Prophet shall be utterly destroyed from among the people” (Acts 3:23).

It’s clear that Jesus of Nazareth was a prophet. He was anointed by God with the Holy Spirit. He revealed God to man. He declared His teachings to be God’s. He foretold of things to come, and God commands that we listen to Him. He referred to Himself as a prophet, and the people regarded Him as a prophet as well.

Photo by Juhasz Imre on Pexels.com