“So Peter was kept in prison, but prayer was being made earnestly to God for him by the church.” – Acts 12:5 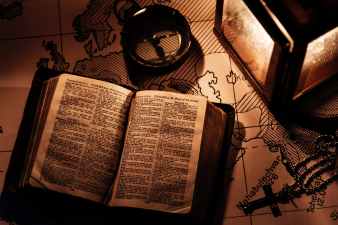 We’re in Acts chapter 12 now. Thanks again to everyone who continues to follow along with me in this journey. As always, I appreciate you!!

I want you  to be with me on the rest of this journey   through Acts, as we talk about restoring Christianity to what it was in the New Testament. We’re friends, already. If you’re like me, you are talented, smart, funny, love God, and are attracted to truth, and you know that the truth of God’s Word is no laughing matter. It doesn’t require any special talent to be able to read God’s Word and obey what it says. But the person who does is very smart.

Acts 12 opens up with the death of John’s brother James, the son of Zebedee, at the hands of the King Herod Agrippa. The Bible says that he killed him with a sword, so it was probably a piercing-through or a beheading. It’s sad that Herod murdered James only because he wanted to please the Jews (Acts 12:2). It wasn’t for some form of justice or because he had done anything wrong. He only wanted to please people (v. 3). He was harassing the church just for the sake of it.

This is reminiscent of what Pilate did to Jesus. He delivered over Barabbas, a murderer, to be saved instead of Jesus who had done absolutely nothing wrong (Matt. 27:16-18). Well, Herod wasn’t going to stop at James. He decided he was going to kill Peter, too. So he arrested him (v.3).

God had another plan, though. Thank God that our plans and His plans are not always the same. That’s why He said, “For as heaven is higher than earth, so My ways are higher than your ways, and My thoughts than your thoughts” (Isai. 55:9).

The church constantly prayed for Peter while he was in prison, and when he went to sleep and angel of God visited him, woke him up, and set him free – with the soldiers and guards still there. Peter thought he was dreaming. (I know that feeling.) The angel let him out of the city.

“Then Peter came to himself and said, ‘Now I know for certain that the Lord has sent His angel and rescued me from Herod’s grasp and from all that the Jewish people expected.’ When he realized this, he went to the house of Mary, the mother of John Mark, where many had assembled and were praying.” – Acts 12:11-12

Peter let the other Christians know how God had delivered Him. He gave His testimony and told them to share it. Then he left and went elsewhere. Of course Herod was angry and ordered the death of those guards.

The Lord wasn’t having Herod’s persecution of His people. One day Herod put on his royal garb, sat on the throne, then gave a speech to the people. They hailed him as a god and not a man. Because he did not give glory to God, the Lord struck him down, and he died (vs. 22-23).

So we started the chapter with Herod harassing the church and killing James, a follower of Christ. And it ends with the Lord striking Herod down.

I think a powerful message for us here is: don’t mess with God’s people. The Lord doesn’t play around about His children.

There will be some people in this world who will harass you – I mean, seriously hound you – because of Whose name you profess. They will try and destroy you, like Herod tried to kill Peter. But they will not prevail. We have the victory in Christ Jesus – those of us who bear the name of Jesus. He won the victory on Calvary and when He rose from the grave.

The Word says that “many are the afflictions of the righteous, but the Lord delivers him out of them all” (Psalm 34:19). We’re going to have trouble in this life, but we’ll be fine with the Lord by our side.

You can have the deliverance that Christ offers if you will obey Him. Believe that Jesus is the Christ, the Son of the Living God. Repent of your sins. Confess Christ. And be baptized for the forgiveness of your sins. Then you can walk in the light of the Savior and live a faithful life for Him.

Do you want to be delivered from your troubles? From your sin? From eternal death?